When I saw the newly made Carro solare del Montefeltro [Montefeltro Sun Cart], 1986 in the summer of 1986 in Pesaro it was an emotional moment. I had the sensation that with this work Eliseo Mattiacci had brought to a taut and lofty conclusion a parabola of about twenty years of practice that had begun by introducing into the garden of art the unusual and unprecedented beauty of Tubo [Tube], 1967, propelled – almost a newborn Nike – by an energy and a groundbreaking event that is already history today. But Carro, like Tubo, also aroused in me the sensation of a perfect progression in that it bore, like his first sculptural formulations, the very notion of motion, despite its evident immobility. Where were they heading, and where had they come from, these creatures of Mattiacci’s art?

More than points of arrival, Carro and Tubo seemed to be the key points in the parabola and therefore like poles of a new openness in invention and creation. Though widely different in formulation, the two works display many fundamental elements that recur in Mattiacci’s work. First of all, both conceptions renew a tension that establishes a highly original spatiality in Italian sculpture. It is one that leads firmly from the insights and the works of Medardo Rosso via the space-time events that occur, for example, in Boccioni’s Forme uniche nella continuità dello spazio [Unique Forms in the Continuity of Space], 1913, and up to the early creations of Fontana’s spatial environment (Arabesco fluorescente [Fluorescent Arabesque], 1951).

Therefore even more surprising to me was a series of works I saw at Mattiacci’s childhood home in Cagli, which I’d visited on a trip with him years before. A recollection of the details would not seem to be out of place here, since they contained elements, features, structures and insights on forces that Mattiacci had expressed in them with instant certainty for the first time. Just outside the door was a small garden containing germinal works from Mattiacci’s artistic prehistory. Notable among them were Cerchi su ruote [Circles on Wheels], 1963, made from the simple assembly of three iron wheels mounted on a piece of railway equipment, and Locomotiva [Locomotive], 1965, consisting of a series of open circles of solid iron assembled in a vertical modular sequence and, in fact, re-exhibited this year for the Premio Città di Fano awarded to Mattiacci. Now, on the subject of these early works – a reflection I certainly do not undertake as a comparison that ends only in a formal confrontation, but rather to point out not only the coherence, but also the unity of attitude and tension that inspired Mattiacci’s work from the outset and as far as Tubo and Carro. First it should be made clear how these epiphanic works already demonstrated Mattiacci’s propensity for forms that are circular, spherical, and, more broadly, for elements that signal the linearity and even the potential mobility of the work. Mattiacci is more interested in forces than in forms: in the tensions, in the energies themselves, more than in the materials that express them. In short, his work immediately invokes the question of continuity, already addressed in Futurism, together with duration and the concept of movement itself. But given the constant presence of the curved element, the concept of space itself is also re-evoked: no longer Euclidean but in accordance with the notions of relativistic physics and curved space. 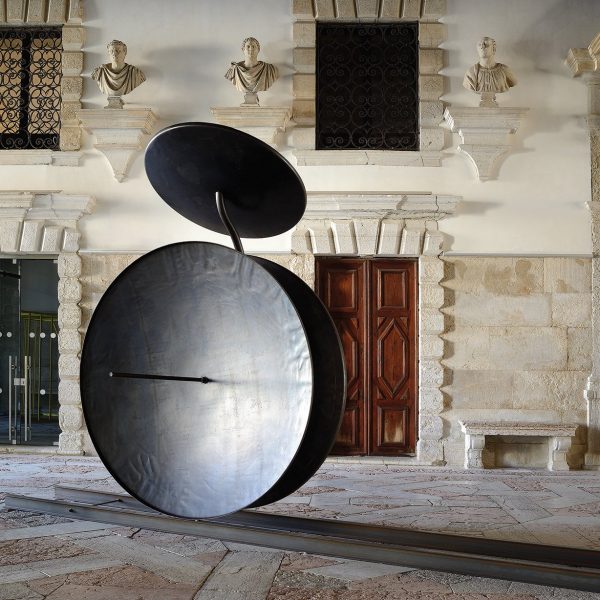 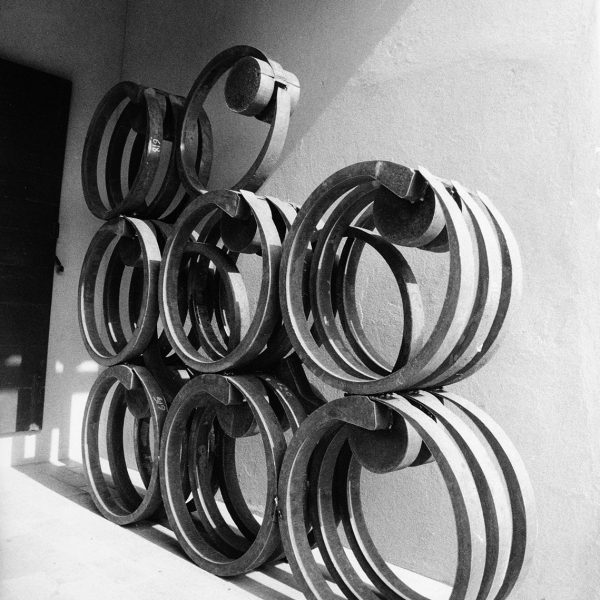 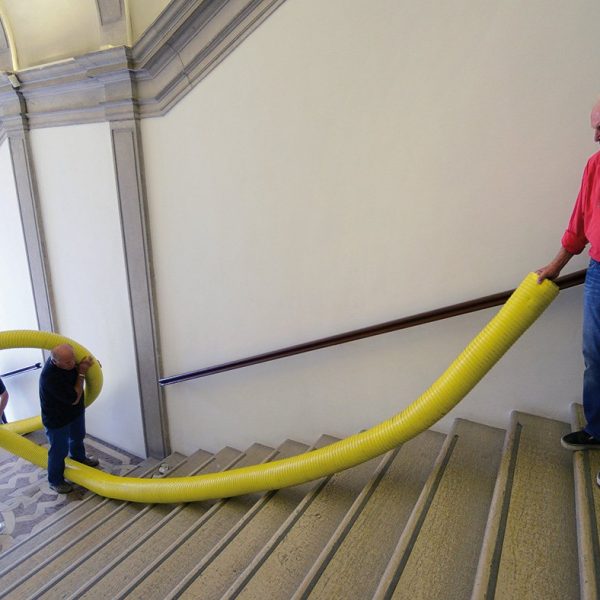 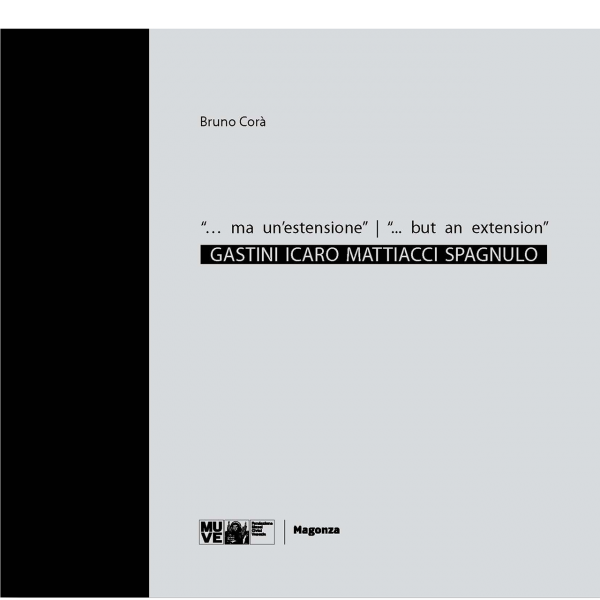 In both Cerchi su ruote, 1963 and Locomotiva, 1965, what primarily seems to concern the young Mattiacci is a modularity-continuity, which, in the explicit allusion to repetition and given the number of circular elements present, denotes an evident interest in dynamic forms. Within this early paradigm of works – which, without becoming the models for Mattiacci’s future sculptures, do constitute, almost like chromosomes, an unconscious and profound structurality, the traditions of a plastic dynamism and Bergson’s focus on continuity. These are properties that before their incorporation in Ettore Colla’s marvellous example Continuità [Continuity], 1955, were primarily Balla’s in Linee di forza di un motociclista [Lines of Force of a Motorcyclist], 1912 and Boccioni’s Forme uniche nella continuità dello spazio, 1913. Cerchi su ruote, 1963 announces Mattiacci’s awareness of certain knowledge that should give pause to anyone who believes, or has believed, that his work, though driven by an empirical momentum and pure instinctiveness, lacks historical memory, meditated planning or continuity in its production. On the contrary, he is one of the most scrupulous observers of these procedural and creative prerequisites!

In its evocation of the tremendous rush of the metallic mass of a train engine, Locomotiva, 1965 comprises three vertical orders of heavy circular forms in steel and iron, and with increasingly smaller diameters, designed to invest the construction with power and force as well as solidity.

And how can one avoid the tendency to see in Locomativa the progenitor of Cilindri praticabili [Traversable Cylinders], 1968 in corrugated, galvanised steel? It anticipates their modularity, circularity, and even the dynamic idea that the cylinders revive, even though designed to be static and traversable. But perhaps the cylinders can also claim an inverse conceptual affinity with Tubo, a possible mega-section of it transformed by an obsession with continuity that adapts according to the site available. The rhetorical exercise could continue indefinitely, so numerous are the internal references that Mattiacci himself has introduced into his first works and which return in all the later ones.

In works such as Pensare il pensiero [Thinking the Thought], 1973 and Rifarsi [Makeover], 1973, both performances at Galleria Jolas in Milan, Mattiacci undertook a self-examination of his face to detect invisible energies. In the first phase of the Milanese exhibition, Mattiacci sat on an aluminium cast of a chair and covered his eyes and ears with a plastered bandage. Then, like an engraver, he mimed using a metal point to write an inscription on a copper plate. Nothing was written, however, inferring that the energy of thought is incommunicable. In the second performance, the creative act of moulding the body focused on covering and modelling his facial features in clay. It seems appropriate to include in this field of self-exploration the event Recupero di un mito [Recovery of a Myth], 1975, whose critical premise helps to appreciate its anthropological and auto-mythographic significance. An exploration of nature’s space can be attributed to Corpi d’aria abbandonati nella cascata del fiume Bosso a Cagli [Aerial Bodies Abandoned in the Waterfall of the River Bosso in Cagli], 1968, Seguire la riva del mare in bicicletta [Follow the Seashore on a Bicycle], 1970 and Scultura eseguita e abbandonata in montagna [Sculpture Made and Abandoned in the Mountains], 1969. Even though years apart, in each of these actions extremely simple means emphasise the spontaneity of the acts performed in the open air, with nature as an active accomplice.